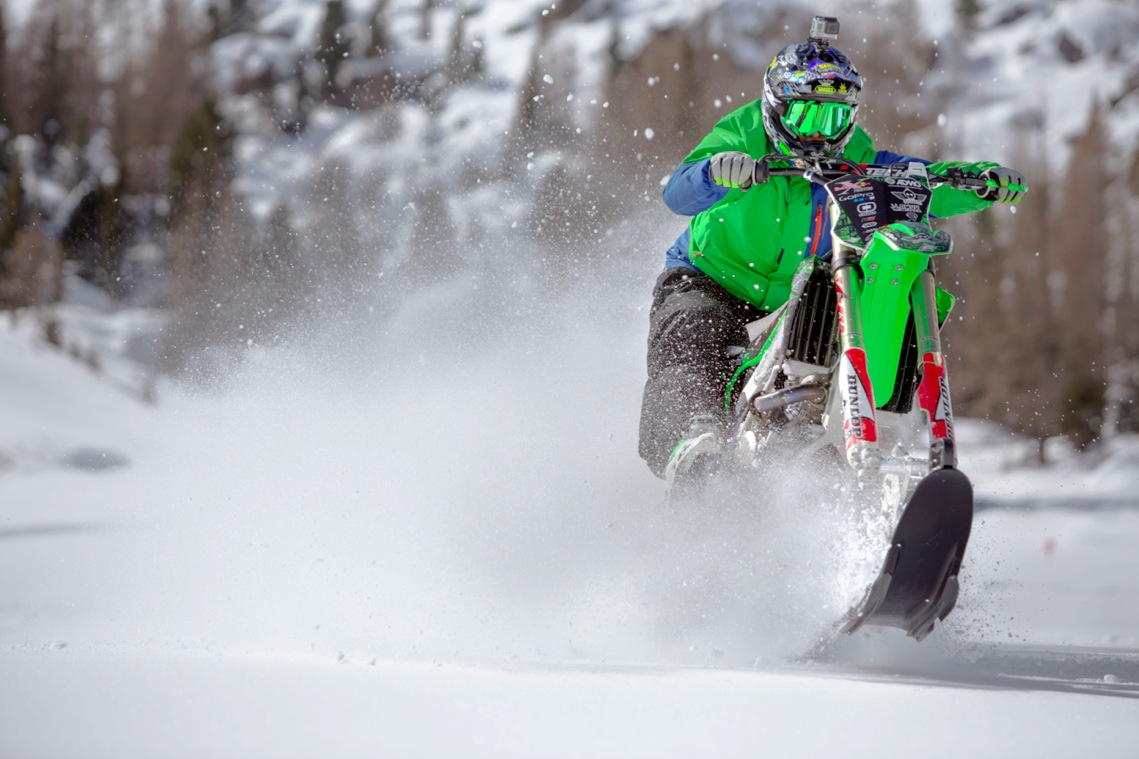 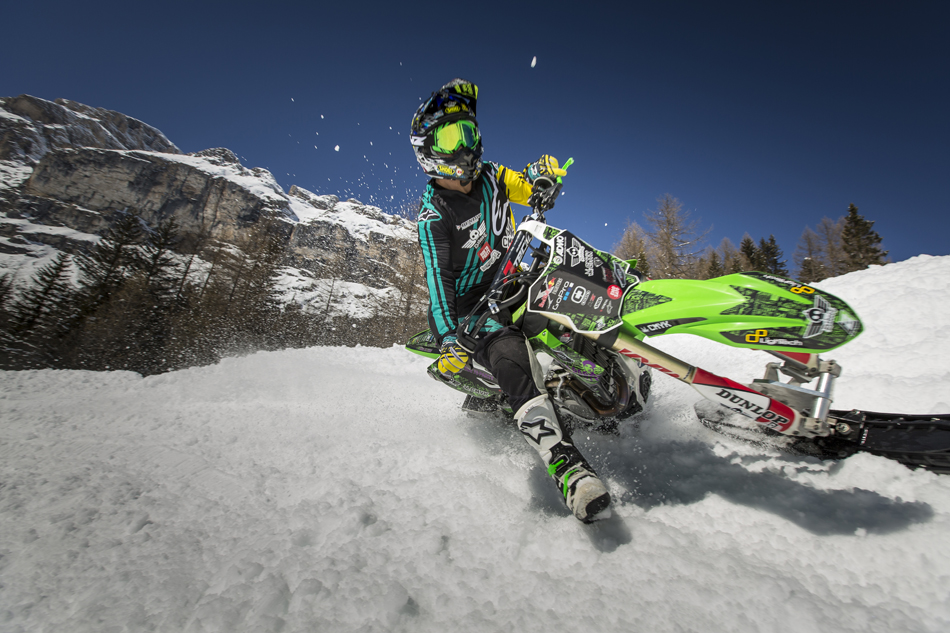 Over the last few years the development and performance of the snow bikes has been getting better and better. Now with off-the-shelf kits that you can fit to your own bike yourself, more and more people are trying out their dirt bikes on the snow. The latest man to give snow biking a shot was Italy’s Alvaro Dal Farra. Raised in the mountains and with a long history in both snowboarding and motocross, Alvaro is the perfect person to tell us what these things are really like to ride. With his new KX 450F Party Fluo Edition fitted with the latest snow kit it was time to get that thing on the mountains. Here’s his low down…

Winter and snow can put an abrupt stop to many motocross lovers seasons, who due to ice, snow and the cold, are forced to park their beloved bikes in the garage for a few painful months as they wait for warmer seasons. But it will never be so again!

The new kit to transform motocross bikes into snow bikes will be the turning point in allowing riders to continue their passion during the coldest months of the year. When the kit arrives there are basically two main parts that you have to mount onto your bike; the rear track and the front ski.  With just a few hours of work you can turn your dirt bike into a real snow beast!

At first the feeling and driving position of the snow bike are very similar to those of a normal bike, but I immediately noticed the difficulty in steering. The handlebar felt very heavy because of the ski, which is mounted in place of the wheel. The bikes steers thanks to two edges on the ski that carve the hard and compact snow, ensuring a good grip and allowing us to control the bike, but the stiffness of the steering does reduce maneuverability a little bit in narrow turns and at low speeds.

The rear track acts in a much stronger and more aggressive way than a dirt bike. It has a larger surface area than the wheel, so acceleration and braking change. It’s also flat, it  not round like a tire, and I noticed how this changes the reaction of the bike, especially in turns, when it’s very likely to skid and lose traction.

The secret to making the bike turn on groomed snow is to load more weight on the front and to drift the rear track, so you can turn the bike even in a small space. Even if you do not load the front a lot, the two edges of the ski still give a good front end stability , unlike the normal bikes, where not loading the front means you risk your front wheel sliding out and losing grip.

The key is to always keep the bike motoring and do not “on-off” with the throttle, because the rear track has a large inertia and you really notice the feeling of accelerating and braking. If we let off the gas, because of the direct drive, the track slows down abruptly, and this takes away stability from the bike and makes the rear slide around. In the air the bike is a bit unbalanced in the back because of the weight of the track (approx. 40kg), and because of the rapid acceleration you have to be careful not to over-jump. 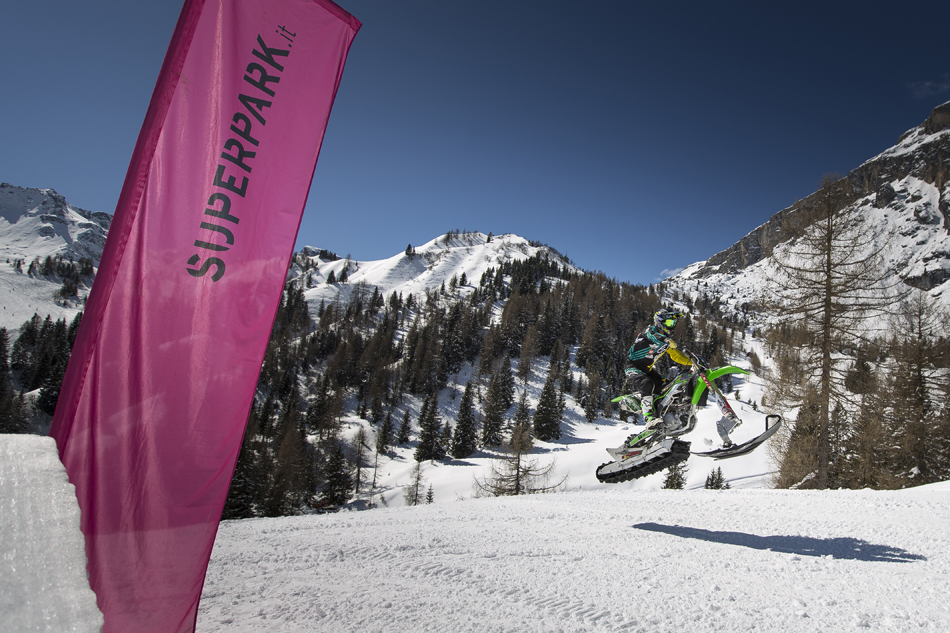 Everything changes in fresh snow. When riding these bikes in powder you need to make the bike float as much as possible. Shifting your weight to the rear will help to lighten the front end and keep the ski on top of the snow. When corning especially you have to keep your weight back and maintain your speed, both ahead of and throughout the corner . If you let off the gas in powder you just stop and sink. To keep the front end light you have to be pretty aggressive with the throttle and really ride the bike on the footrests, with your body weight hanging off the back!

Riding these snow bikes reminded me of riding dirt bikes in sand. Out in the dunes you have to keep your weight back and not let off – it’s definitely the same principle on the snow bikes.

So those were my first impressions of riding a snow bike. It’s definitely one to try! I’m sure that if you ever have a go on one of these you’ll be thrilled, and it will instantly make you will want to expand your moto passion onto the snow. 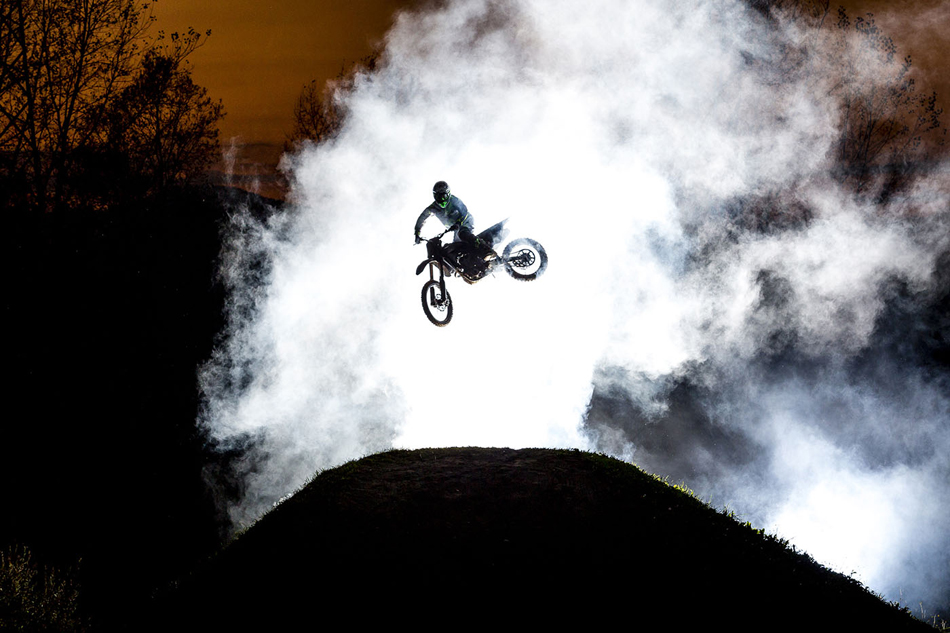