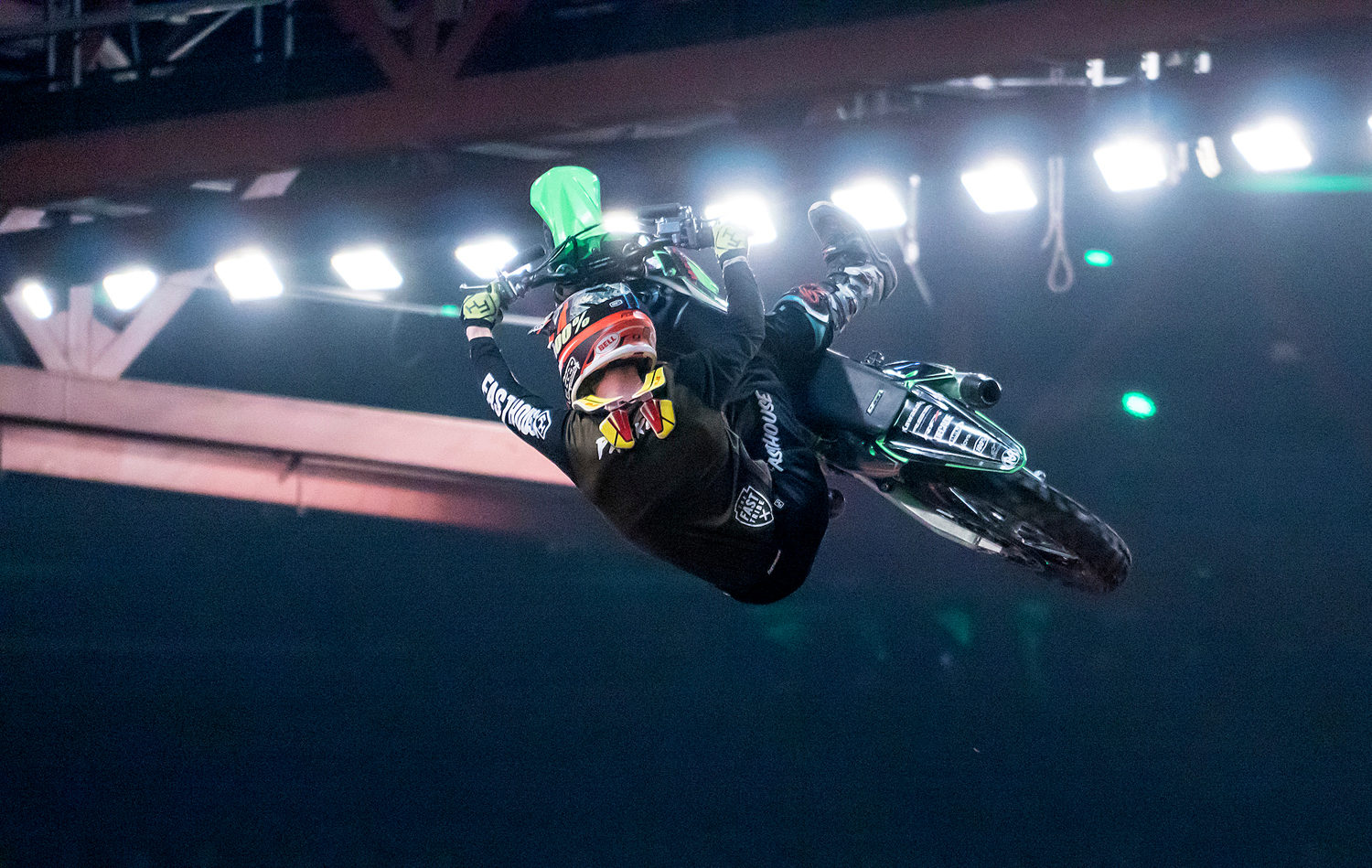 If you followed the British MX championships during the last 5 years the chances are, you’ve heard of Nathan Parker. A regular at the top flight of British Motocross. Towards the end of the 2014 season Nez announced that we was taking a different path, one away from professional motocross racing. For those of us who lived in the North West of England this was a bit of a surprise, he was our guy! Luckily for those of us who are into FMX as much as racing, Nez stuck to two wheels and started hitting ramps….the pride of the North West is back! We caught up with Nez on his return from the Motorcycle Live show, where he was riding 10 days of demo’s promoting the UK Arenacross tour. 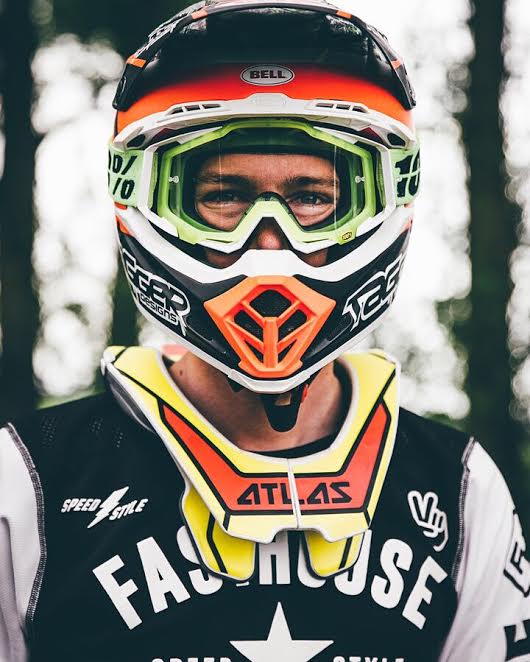 You rode for a long time at the highest level in Motocross (British Champs and GP level), what brought about the switch to riding FMX? and how soon did you know during your last MX season (2014) that it was time for a change?

Well for 2-3 years I was sort of over racing motocross…I wasn’t a young kid any more and needed to start earning a living and racing motocross wasn’t going to provide that. There are way too many parents paying their kids wages and buying on to teams, so when you ask for money to ride compared with a rider who’s putting 50k into a team you know who’s getting a ride. I mean I had offers for 2015 off a couple of teams but without a wage I don’t feel like I could have done the job properly.

Did you consider other avenues other than FMX?

Yeah a lot of different things…Firstly I thought of getting a real job but I couldn’t bring me self to do it! Speedway was an option as my left knee if still OK. I had a shop wanting to help with an enduro bike to go do some sprint Enduro events, but Freestyle seemed the most fun option!

Do you have a place to ride up North?

With the British weather being such an arse most of the time, what are you plans to continue riding through the Winter?

Well there’s a nice little spot in the woods down Devon that Squibby [Jamie Squibb] owns and its unreal. He’s got an all weather set-up so hopefully get plenty of riding down there…and maybe head to Spain for a few weeks in the new year.

You recently learnt to Backflip, can you tell us a bit about that whole process?

Flipping was something that I told myself I would do when I started freestyle! I got a call off Squibby asking if I wanted to Flip into his foam pit, but had to do a couple days of work with him to get everything sorted. When the pit was ready we decided not to use the Superkicker, as its way different to a normal ramp. We stuck an 8meter ramp at 21meters to the pit and every flip came round to the wheels. We did a couple of days in the pit and I went home for about 10 days to sit and think about flipping to dirt! The next time I went down I got there late afternoon and was pretty tired from the long drive, but decided to kit up and do a few in the pit ready for the following day. Every Flip went perfect and Squibby said to me “I’m not going to tell you to Flip, but you have 100% got it!” So we went over to the resi landing and I revved one round! I was so happy I landed it but knew landing one Backflip didn’t mean you where a Flip rider! The next few weeks/months would be hard. I’ve just finished 10 days at Motorcycle Live in Birmingham, Flipping in 2/3 shows a day and it went fine with no dramas!

How do you view the FMX scene compared to say…the paddock at the British MX champs?

It’s so chilled compared to motocross. Everyone asks me if I miss racing and they are shocked when I say no I don’t. All the lads in the FMX scene are spot on and there is no clicks or bitches…! 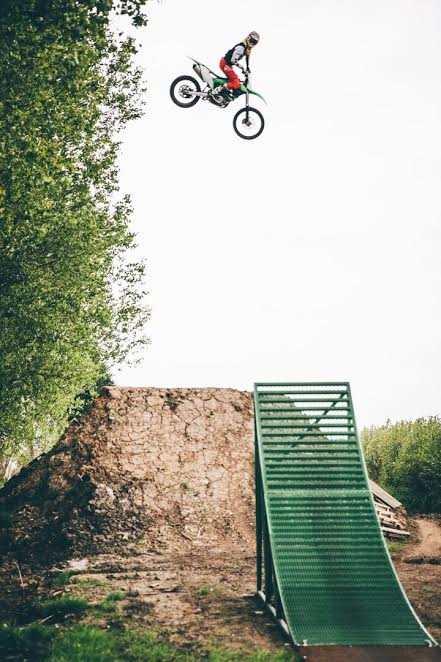 Do you train as much as you did when you raced?

How far do you want to take your FMX riding?

Hopefully to Spain at some point to go ride the parks over there with some top guys…other than that just M6-M5-A38=Devon.

Will you be riding the FMX at the UK Arenacross Tour?

Yeah I’m riding there, hopefully I will have a few more tricks by then as well.

Did you follow much FMX when your were racing?

I used to watch all the old DVDs when I was younger but didn’t really follow Fmx when I raced.

Have you seen the Heaven and Hell UK FMX dvd’s from back in the day?

Yes I’ve seen them! Some good stuff on those DVDs back in the day. I’m kind of gutted I didn’t get involved early on in the sport.

Just everybody who has helped me along the journey ! 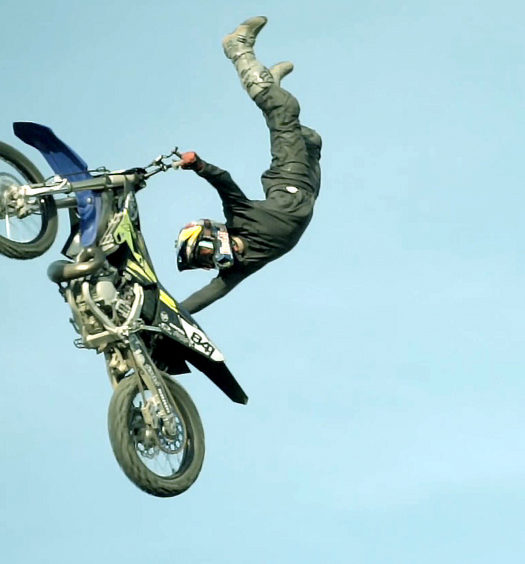 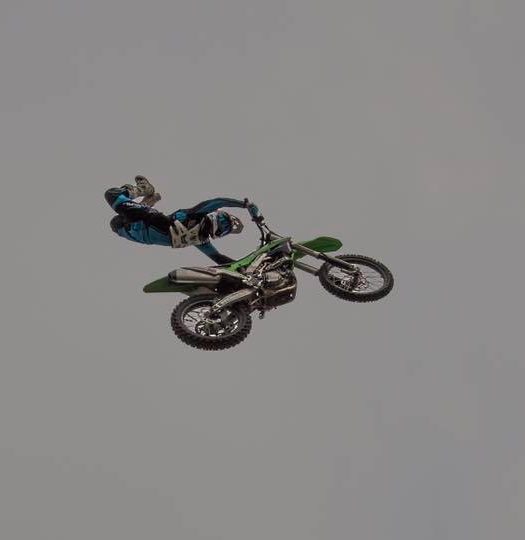